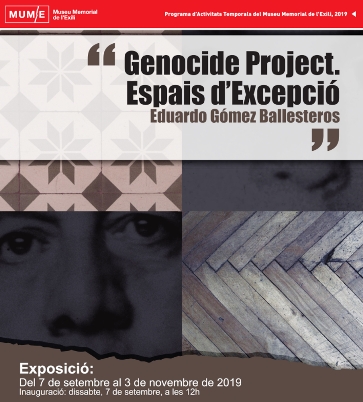 After an exhibition at the MUME, in the section "Art and memory", part of the "Genocide Project", the video "Machettes", the MUME exposes in more depth and detail the artistic research work around the historical genocide.

Eduardo Gómez presents, for the second time, the work of MUME de la Jonquera related to the project in continuous construction, called the Generic Genocide Project, where violent images, mainly of war situations, constitute a fundamental part of his artistic work. With them, his The objective is to contribute to the understanding of events and to describe some of the problems that link art with testimony and memory.

He uses the field of visual memory through images that contain implicit violence, which often leads him to work from the victims' side, with all its tension, terror and misunderstanding. The pieces of art created are fed with archive images of victims of violent political processes, collected in the countries of origin of the conflict and photographs of places of torture, isolation and execution.

The exhibition consists of several pieces based on archive images linked to violent processes, with which the artist aims to bring the viewer closer to the collective memory through individual experience and thus indicate a special way of making a monument: as icons of the representation of death in our time. The basic documentary material of EXPERT SPACES was compiled on the occasion of two exhibitions that took place in 2016 at the Museum of Memory and Human Rights and at Villa Grimaldi, in Chile, where images of victims and victims were collected. and places of torture and execution of the military dictatorship established in that country between 1973 and 1990.

This exhibition is shaped like a chess board as a playing field, life and death. If there is something that characterizes the situation of the victims, it is the place they occupy in space, the impossibility of escaping from this place, the feeling of being condemned to trample underfoot as the "remains of soils" bear witness to their pain: Protagonists of these spaces of exception of your rights and freedoms. Furthermore, in this recreated space, the victims share a presence with the victimizers, as necessary tools of repression.