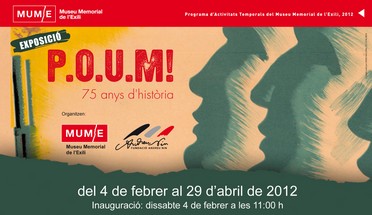 On 29th September 1935, the Partit Obrer d'Unificació Marxista (POUM) was founded in Barcelona, an organisation led by Joaquim Maurín and Andreu Nin, which defined itself as Marxist and revolutionary. With the outbreak of the Spanish Civil War, in July 1936, it participated in the new committees and organisations created in Republican Spain and the workers’ and industrial collectivisations while Nin was named Minister of Justice of the Catalan Government. POUM’s defence of the revolution and its criticisms of Stalin and the USSR earned it a campaign of discredit by the communists. After the Events of May 1937, the party was persecuted and Andreu Nin was assassinated. However, after the defeat of the Republic in 1939, the POUM clandestinely continued its fight against Franco’s regime inside the country and in exile.

On the 75th anniversary of its constitution, the Andreu Nin Foundation wishes to remember its history and recover its legacy for the present and future.

11: 00 pm Inauguration and presentation of the exhibition "POUM! 75 years of history "
Speaks by Jordi Font, director of MUME, Pelai Pagès, historian and curator of the exhibition
11: 30 guided tour of the exhibition
12: 15 pm performance by the choir "Without calling it"
13: 00 pm Conférence "The POUM in Girona region", by Andy Durgan 's, historian
14: 30 Lunch at Agullana
04: 30 pm Colloquium "the exile of the POUM and the news of his legacy". With Maria Teresa Gutiérrez Carbonell, Pepe and Alfons Bech.
• This event will take place in the "Society of Agullana" and counts on the collaboration of the Association Soca-rel Alt Empordà.

For more information, please download the programme and the poster.