Awards and institutional recognition for MUME 2008-2012

The Exile Memorial Museum has been recognised on several occasions for its public work. In this section, we provide basic information on these awards and institutional recognition.

1. Award for the Best Heritage Initiative of the Catalan Association of Art Critics (ACCA) 2011

1. Award for the Best Heritage Initiative of the Catalan Association of Art Critics (ACCA) 2011

On 26th March 2012, MUME received the Award for the Best Heritage Initiative of the Catalan Association of Art Critics (ACCA).

The event, in the MACBA auditorium in Barcelona, had the participation of the Director of MUME, Jordi Font, and the President of the MUME Consortium and Mayoress of La Jonquera, Sònia Martínez. 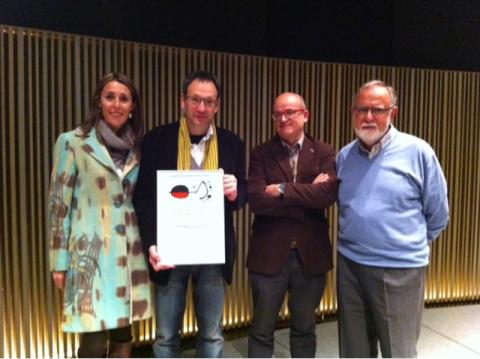 The Catalan Association of Art Critics (ACCA) gave MUME the Award for the Best Heritage Initiative (ex aequo). The ACCA awards are given after a vote by its members based on a pre-selection of facilities, initiatives, projects and exhibitions from all over Catalonia.

The award recognises MUME’s work in the field of restoring memory linked to the historic episode of exile and emphasises the relevance in terms of heritage of MUME’s temporary exhibition programme, especially in everything related to the recovery of the artistic activity of that historic period, which has the potential to reflect and evoke the concentration camp experience and the wounds caused by exile in general.

MUME was recognised with the Catalunya LiberPress Award, officially presented on 18th October 2012 in Girona.

Sami Naïr, Josep Fontana, Manu Chao and MUME were among those who received the LiberPress 2012 Awards. Awards were also bestowed on Elías Querejeta, Pedro Miguel Etxenike, Manuel Costa-Pau, the Descendents and Friends of the Elne Swiss Maternity Hospital (DAME) and the children who died in Argelès-sur-Mer concentration camp (Roussillon).

For the LiberPress Association, "the Exile Memorial Museum receives the LiberPress Catalunya Award 2012 because it is an idea, an institution, an almost perfect project that defends human rights, and because it investigates and condemns one of the most painful episodes of humanity: the path of exile, the displaced, the refugee camps, the suffering involved in leaving one’s country, especially in reference to the retreat and the exile of the Spanish Republicans abroad. This museum is a source of pride for Catalonia and for humanity and should be better known and recognised."

The LiberPress Catalunya Award has two subcategories: the individual award was for the historian Josep Fontana (Barcelona, 1931), “for his great historical and essay work” and “for the constant rejection and condemnation of the economic and social impositions of the established system.” And the award for an institution or body was given to the Exile Memorial Museum in La Jonquera (MUME), an “important” museum that, according to Carles McCragh, representative of the LiberPress Association, “should be visited more often.”