The MUME, following the schedule of events to commemorate the 70th anniversary of the end of the Civil War and the beginning of Republican exile, is hosting an exhibition dealing with issues which resulted from the establishment of the Franco dictatorship in Spain and, more specifically, in the province of Girona. This exhibition seeks to relate the fierce repression carried out at the very beginning by the Franco regime in our region. Exhibition organised by the Historical Archive of Girona, Alt Empordà Regional Archive. The exhibition also has the collaboration of the Alt Empordà Regional Council, the Association of Relatives of Victims of Reprisals by Franco and the MUME. 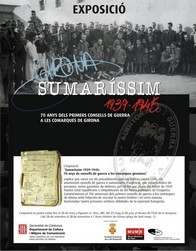