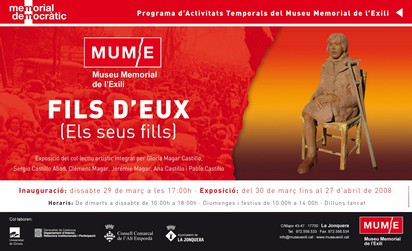 In this exhibition the artist Serge Castillo, a descendant of Spanish Republican exiles, and relatives including his own children, have interpreted, through the use of different artistic expressions such as painting, sculpture, film and installation, the legacy of exile, its survival through the generations and how this memory is transmitted. This exhibition was planned by the association FFREE at the Château of Valmy in Argelès-sur-Mer to commemorate the 69th anniversary of the Spanish Republican exile. This exhibition also seeks to emphasise the commitment to intensify cross-border links and contacts with the associations of exiles in France.

Visits to the exhibition were significant and had a strong emotional impact, especially through the sculptural reproduction of icons of the Republican exile.