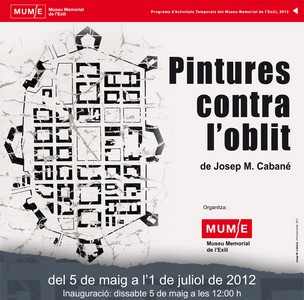 Josep Maria Cabané is a painter who in recent years has devoted his pictorial creation to the most extreme cases of human barbarism. Based on knowledge of the scientific industrialisation of death, which has its greatest expression in Nazism, the artist has striven to represent the scope of the tragedy and destruction through the language of painting. His works, of an apparently abstract nature, involve an exploration of beauty in order to comprehend horror. The series of paintings began after a visit to Mauthausen, which led him to base them on a pictorial recreation of the maps of the ghettos and concentration camps created by the Nazis, thereby creating a symbolic cartography of the deportation and violence. Paintings that at first sight seem to be simple stains stimulate a reflection on the catastrophe which desolated Europe during the Second World War. It is a very solid work which, beneath the aesthetic beauty, invites us to think deeply about the value of memory.