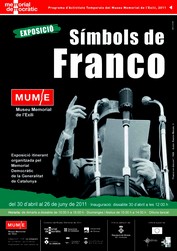 Exhibition mainly promoted by the Memorial Democràtic, along with the Catalan universities of Girona (UdG) and Lleida (UdL), the Autonomous University of Barcelona (UAB), Rovira i Virgili University in Tarragona (URV) and ADIGSA. The Francoist dictatorship saw public spaces as a latent threat to be controlled; they were places where citizens could meet, rally, talk, become politically aware, and express their opinions and demands. Consequently, the Francoist authorities strove to regulate and restrict the use of these spaces by citizens. Nevertheless, more than thirty years later, throughout Spain and, to a lesser extent, Catalonia, we can still find these symbols of Francoism, these permanent antidemocratic icons in buildings, monuments cemeteries, squares and crossroads. The first democratic town councils changed the names of streets and removed some monuments while others, relocated far from their original place, camouflaged or bearing erroneous, martyrologic or victimary inscriptions, have endured without much historical or heritage significance.

The objectives of the exhibition are two-fold: to reflect on the symbols of dictatorship and their permanence in the democratic public space, and the dissemination of knowledge and the current location of these symbols.

Franco’s Symbols seeks to reflect on the role of symbols used by the Francoist regime to channel its ideology and assert a strong identity of the Spanish people based on the concepts of “Spain” and “Caudillo”. To a large extent, the exhibition is born out of the desire to present to the public the Cens de Simbologia Franquista de Catalunya (Catalan Census of Francoist Symbols), a project launched by the Directorate General for Democratic Memory and the Memorial Democràtic with the aim of locating, identifying and cataloguing the symbolic vestiges of the Francoist regime still preserved in the public spaces of Catalonia.

This temporary exhibition was held at the Espai Memorial in Barcelona from 15th December 2010 to 13th February 2011.