Exhibition: “Exile as an Inheritance.” Photographs and Drawings by Jordi and Josep Bartolí

Exhibition “Exile as an Inheritance.” Photographs and Drawings by Jordi and Josep Bartolí 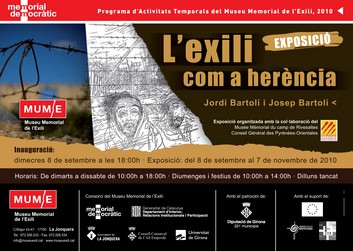 The photographer Jordi Bartolí, nephew of the renowned artist and painter Josep Bartolí, presents an exhibition where his photographs, taken in places where his uncle allegedly was during the years of exile in France, are placed into dialogue with reproductions of extraordinary drawings Josep Bartolí made during his stay in some of the French concentration camps. An emotional exhibition which aims to trace the itinerary of Josep Bartolí’s exile.