Exhibition: "Chechens outside their homeland" by Maryvonne Arnaud

Exhibition “Chechens Outside their Homeland” by Maryvonne Arnaud 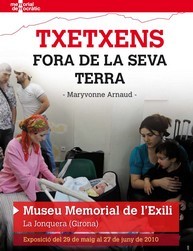 The exhibition “Chechens Outside their Homeland”, by the photographic artist Maryvonne Arnaud, deals firstly with the line of civic engagement and, secondly, to provide tools and elements to understand the world we live in. In fact, this exhibition was created and produced by the Centre for the History of the Resistance and Deportation in the city of Lyons. This centre, with similar characteristics to the MUME, is dedicated primarily to preserving the legacy of testimonies and the memory of historical events close in time, in this case of France during  World War II, but spares no efforts in establishing links between the past and the present. Due to the coincidence in their objectives, the two museums and the Democratic Memorial of the Catalan Government reached an agreement to present this photographic exhibition in Catalonia. With an adaptation of the contents by Jordi Font and Jordi Guixé, the exhibition can be viewed during the month of June at the MUME and during the months of July and August in the Democratic Memorial space, located in Via Laietana 69, Barcelona.

From 8 July, the exhibition will be seen in the Democratic Memorial space in Barcelona (Via Laietana, 69).

On 8 July, Aude Merlin will take part in the first of the roundtable discussions about the reality in Chechnya today and, on 15 July, political scientists Francisco Serra and Carlos Taibo will preside the second panel discussion focused on the role of Chechnya in the geopolitical international map.