Exhibition The Battle of the Pyrenees

Exhibition “The Battle of the Pyrenees. Allied Information and Evasion Networks in the Pallars, Alt Urgell and Andorra during the Second World War” 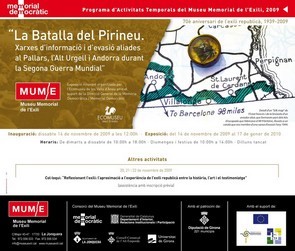 “The Battle of the Pyrenees. Allied Information and Evasion Networks in the Pallars, Alt Urgell and Andorra during the Second World War” is a travelling exhibition organised by the EcoMuseum of the Àneu Valleys with the support of the Directorate General of the Democratic Memorial. Specifically, “The Battle of the Pyrenees” is the name given by some of the British secret agents to the many actions of escape from Europe to the United Kingdom through the Pyrenees. Soon after, many of those agents wrote their reports and books, and were widely recognised. In other areas such as Belgium, the networks and agents of evasion were recognised immediately. In Pallars and all of the Catalan Pyrenees, after the World War, the important work carried out by the evasion network remained hidden, very similar to when the networks were operating underground.

This exhibition, which has been promoted by the EcoMuseum, has sought to show that these events were also important on this side of the Pyrenees. In this respect, the evidence shows that in the years of Franco's dictatorship there was a systematic crackdown on the vanquished in the Civil War, many Pyreneans continued “at war” on the side of the Allies and democracy, as couriers of confidential information and guides for groups of escapees. An estimated 80,000 people crossed the Pyrenees to the south in order to escape Nazi persecution. In many cases, almost half went to confinement centres and concentration camps accredited by Franco’s New State.

The exhibition gives a voice to and provides images of other networks and people, in some cases unknown to this day. The key figures are John, James and Ricardo Soldevila (Escart), Generosa Cortina (Son), Roger Rieu (Couflens), Manel Vidal (Isil) Parramon Laurenti (Josa de Cadi), Joaquim Baldrich (Escaldes), Juan Catalan (Llavorsí) and Josep Ibern (Ager). All of them worked for Belgian, American and British information and evasion networks.

The exhibition has been presented in Esterri d’Àneu, Sant Julià de Lòria, Toulouse, Saint-Girons and Seix.

The contents of the exhibition, and all related information, are available online in four languages: Catalan, Spanish, English and French.