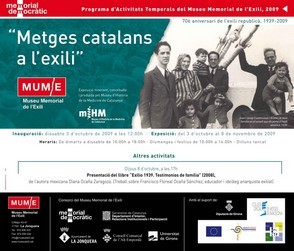 The MUME hosts the travelling exhibition produced by the Museum of the History of Medicine which reflects the tragedy suffered by the scientific community of our country due to the outbreak of the Francoist reaction. The scientific and medical advances made during the Republic were curtailed by the Franco authorities.

Because of the Republican defeat, the best doctors and scientists were forced to leave their country and advances in medical programmes were interrupted almost until the 1980s.