Exhibition: A Long Way. Bosnia, the shame of Europe

Exhibition “A Long Way. Bosnia, the Shame of Europe” by Miquel Ruiz 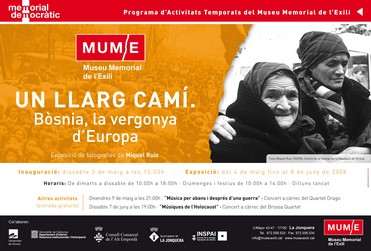 Miquel Ruiz is a photojournalist who has travelled to different zones of conflict that have provoked unfortunate population movements. The war in Bosnia and Herzegovina impressed him enormously and from this came a striking report on Srebrenica. This time the author proposed a series of photographs printed on plotters of considerable size which dealt with the daily life of Sarajevo in the early nineties, as part of the scene of a long siege. It is a city that saw how overnight many of its citizens had to flee, while others arrived trying to protect themselves from Serbian attacks and the population that remained in the city became, in part, exiled in their own houses.

The exhibition received many visitors, with a well-attended opening including Bosnian exiles living in Catalonia.