Exhibition: Fragments. Based on "The Emigrants" 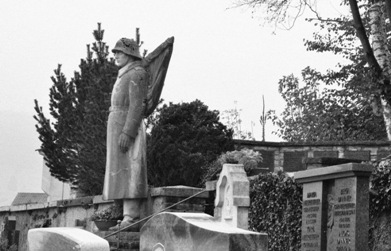 Based on The Emigrants, by W. G. Sebald

“Translating a book is,” in Josep Carner’s words, “the best way of reading it.” In fact, the audiovisual project Fragments is the result of the Anna Soler Horta’scontact as a translator with the books of the German writer W. G. Sebald and, more specifically, the volume The Emigrants. Following the steps of this writer, who combines text and images in his creations, she has explored some of the landscapes linked to the leading characters of the book to photograph the paths taken. The photographs make up a kind of record of absences that seeks to halt the inevitable disappearance of the past, just as Sebald, the narrator of 20th century memory, does. Moreover, the project interrelates the images and text of The Emigrants in a physical space conceived to strengthen the viewers’ commitment to the materials exhibited so they can perhaps finally discover the “fragments of truth” to which Walter Benjamin referred. 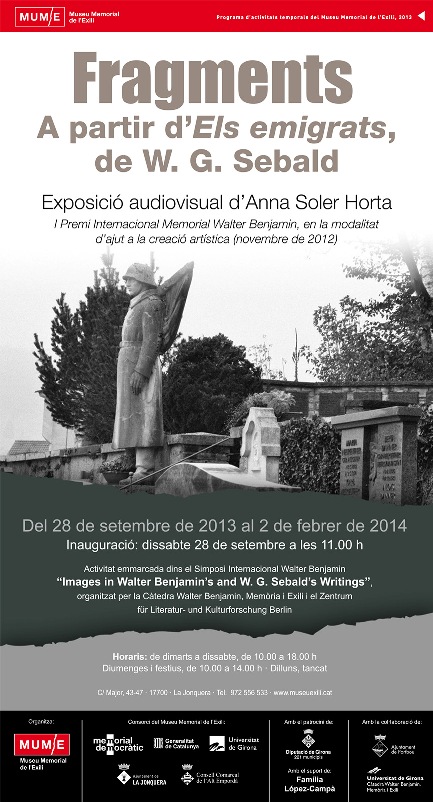 Anna Soler Horta (Arbúcies, la Selva, 1974) holds a degree in Translation and Interpretation. She has translated into Catalan many works including essays, fiction, poetry, theatre and children’s and youth literature, mostly from German. Her interest in the writer W. G. Sebald emerged following her translation of the book The Emigrants and, later, Austerlitz, both published by Edicions 62 (2001 and 2003, respectively). Her audiovisual project Fragments received the 1st Walter Benjamin Memorial International Prize in the category of assistance grant for artistic creation in 2012. The objective of this prize, presented by the consortium of the Exile Memorial Museum in collaboration with the Memorial Democràtic, is to foster reflection on the history and memory of the 20th century.