Presentation of the book: Històries de frontera, by Josep Clara

Presentation of the book: Històries de frontera, by Josep Clara

After the welcome by the director of the MUME, Alfons Quera, will give rise to the intervention of the director of the Editorial Gavarres, Àngel Madrià and the author and professor Josep Clara. The event will be closed by the Director General of Democratic Memory, Gemma Domènech. 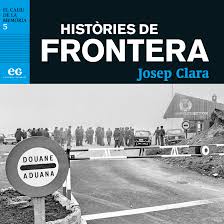 This is not a book of history, but of stories, of stories of men and situations, of serious and formal divulgation, that gathers seventy narratives of historical character on a same territorial scope of border, the one of the Eastern Pyrenees, of the Cerdanya in the Mediterranean Sea. The historian Josep Clara notes the role of the border as a refuge in times of conflict and political emigration, but also as a space to prepare destabilizing movements for the current system. Also the border as a privileged territory for clandestine activities and as a trap to leave life there. As a place of governmental and military control, to ensure the defense of the territory against possible enemies, and as a space where human rights are not respected. As a setting for episodes in the economic, religious and social life of the people who settled there. Nor does the author forget the fact that, within the border, not only territorial boundaries or walls are raised, but they mark power, dependence and subordination between people.

Josep Clara Resplandis (Girona, 1949) is a full professor of Contemporary History at the University of Girona and a corresponding member of the Royal Academy of History. After studying at the Escola Normal de Girona, he graduated and obtained a doctorate in Philosophy and Letters (history section), at the UAB, in 1976 and 1982, respectively. He is the author of some forty books in his specialty, such as El federalisme a les comarques gironines, 1868-1874 (1986); Ramon Vila, Caracremada, the last Catalan maqui (2006, 3rd edition); Slaves and laborers of New Spain. The Workers' Battalions in Catalonia, 1939-1942 (2007); Franco's forts. Military archeology in the Catalan Pyrenees (2010); Nazis on the border of the Eastern Pyrenees, 1939-1942 (2016); Persecuted after deaths (2018) and The Civil Guard. Spine of the Spanish State in Catalonia, 1844-2018 (2019). He has also practiced journalism and historical dissemination in Presència, Canigó, El Correo Catalán, Revista de Girona, Serra d'Or, L'Avenç, El Punt, Diari de Girona, Gavarres, Cadí-pedraforca, Les Garrotxes, Alberes. and in other county publications.