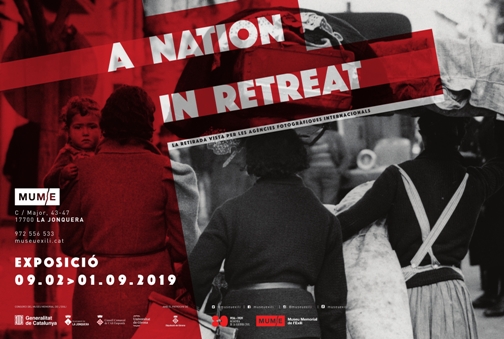 The commemorations of the 80th anniversary of the end of the Civil War in Catalonia and the withdrawal of the People's Army of the Republic to France allow the Memorial Museum of Exile (MUME) to once again focus on the drama of the republican exile in February 1939. The massive arrival of almost 475,000 refugees in the territory of northern Catalonia caused an unprecedented humanitarian catastrophe in Western Europe that undoubtedly definitely marked the history of the twentieth century.

A few days before Christmas 1938, the Francoist side launched what they called "La Campaña de Cataluña". The magnitude of that military operation led to the break-up of the republican front and the flight of hundreds of thousands of people - military and civilian - towards the Pyrenees border in the Girona region. A hard and long exile was beginning for many of these people. The speed and undoubted effectiveness of that military operation is largely explained by the application of the Francoist army, with the advice and participation of its allies, Nazi Germany and fascist Italy, of a new war technique: the Blitzkrieg (Lightning War). One of the main features of the new strategy is the relevance of technology and the way modern aviation operated with the aim of striking the military, economic and political capacity of the Republican front and rear and thus making it possible. a rapid advance of ground troops in order to effectively conquer new territories. This strategy led to the unfailing transition from the war of positions - so characteristic of the First World War -, with a front set on the ground, to a lightning war that transformed the front line into an extremely mobile space. The Blitzkrieg experienced in Catalonia allowed the German army, in the first phase of the Second World War (1939-1943), to dominate almost the entire European continent.

The exhibition A nation in retreat. The withdrawal seen by international photographic agencies, proposed by the Memorial Museum of the Exile of La Jonquera (MUME), shows how the representation of armed conflict changed profoundly after the Republican Retreat of 1939. About 135 media journalists were accredited, in effect, by the French authorities in order to capture and recount the human drama that was taking place on the Catalan border. International photo agencies also rushed to send their photojournalists. The MUME exhibition features a selection of 80 photographs taken by major French photo agencies such as France Presse, S.A.F.A.R.A or Fulgur or American photographs such as Wide World Photo for The New York Times, Keystone, Associated Press Photo or ACME. The tour of the exhibition offers the possibility of following, day by day - approximately from January 26 to February 10, 1939 - the coverage of this historic event through the eyes and perspective of the great war photographers of then, among others, Robert Capa, David Seymour Chim or local photographers from the Roussillon area who worked for the big agencies, as was the case with the indispensable Auguste Chauvin.

The exhibition demonstrates, through images, the mutation that the Republican Retreat will imply for international photojournalism. Since the 1930s, photojournalism has developed enormously and taken on a politicized character, offering the world a fundamentally militant and progressive vision. The way of waging war during the Francoist occupation of Catalonia made it impossible to grasp a representation of the front line, given that the front did not exist due to the vertigo of military operations. This aspect, of great importance in the photographic capture, forced the photojournalists to visually narrate the war through the experiences of the civilian population that had been exiled and of the defeated republican military, who, when crossing the border, will become also in temporary asylums in a III French Republic with little willingness to host. This destitute population, dependent on the French state and international solidarity, will become, as it is shown in the exhibition, the object of a new way of understanding the visual capture of armed conflicts. To a large extent, humanitarian photography was born on the Catalan border in February 1939.

As stated in an article in the bulletin of the humanitarian organization British Committee for Refugees from Spain in February 1939, it was the withdrawal of an entire nation (A nation in retreat). An article heading to which the title of this exhibition refers in order to highlight the prominence that the civilian population will acquire since then in the crises caused by armed conflicts. In short, it was no longer just a defeated army, but a whole people that had succumbed to the violence of fascism.

The curator of the exhibition

Eric Forcada (Perpignan, 1975) has a degree in fine arts from the University of Montpellier III, in art history and in Catalan studies from the University of Perpignan. Eric Forcada focuses his professional activity as an exhibition curator and as an author of publications and catalogs in collaboration with various public or private institutions in Catalonia and France.

He began his career as a journalist and art critic working for various print media such as La Semaine du Roussillon (1999-2005) or television such as France 3 (2000-2005). He later became part of the Culture Department of Perpignan City Council as director of museum and exhibition policy in the capital of Roussillon (2005-2010). In parallel to his professional activity, in 2006 he created the culture magazine Mirmanda with Oscar Jané and since then he has co-directed it. He also participates in the reflection group that bears the same name as the journal, which unites, between Perpignan and Girona, researchers and thinkers concerned with the territorial and cultural development of the lands that make up the north of Catalonia.

As a researcher, he has specialized in twentieth-century art in northern Catalonia. One of the points of reflection and research focuses on the study of the contributions of the creation Concentration produced by artists in exile Catalan and Spanish republican refugees to the lands north of Catalonia (1939-1944), especially in crisis of representation that affected the entire art world after World War II. In this sense, he has curated several exhibitions related to this issue and has dedicated lectures, articles and catalogs to this little-known period of Catalan art.