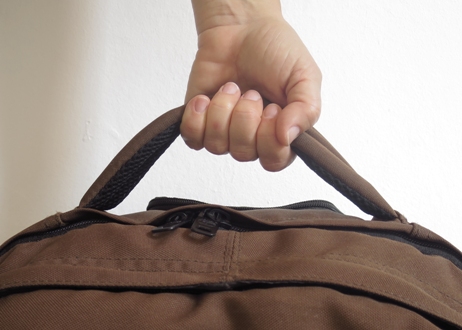 Isabel Banal has spent a great deal of time working on the subject of encumbrance, a gesture intrinsic to the human condition of carrying things, of all kinds and at all times…

In the early 2000s she created a set of miniature figures as a reinterpretation of nativity scene figurines where women and men normally appear holding different agricultural and artisan products.

In the case of allez the figurines emerge from handkerchiefs replicating bundles, bags and suitcases; they are the luggage... And they can evoke images of “the retreat” for us.

She now returns to one of these objects, the travel bag, to go on exploring these forced moves that can be imposed on us.

Fleeing and seeking refuge... due to the folly of human beings, their struggles of all kinds, wars and plunder. Trying to survive. Where? How?

Each bag, hanging in the air a few centimetres from the ground, is embroidered on each side with two contrasting words that tell us about spatial location, about belonging... HERE and THERE, INSIDE and OUT, NEAR and FAR. Simple words and, at the same time, with many connotations that challenge us.

Lives and works in Barcelona and Abella de la Conca.

From 1990 he was a teacher at l'Escola Massana. Centre d’art i Disseny. Barcelona.