Exhibition: The Exile of Moses Genover 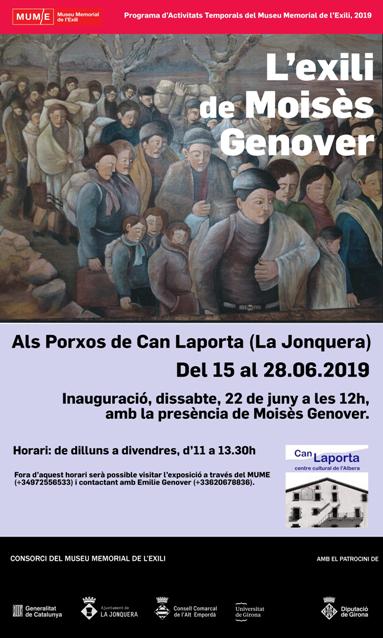 Exhibition: The Exile of Moses Genover

Opening on Saturday 22 June at 12 noon, at the Porxos de Can Laporta, with the presence of the artist, Moisès Genover.

Moisès Genover (Figueres, 1928) is, in addition to being an artist and cabinetmaker, a child in exile. His family went into exile in two phases. First his father, Emili Genover, in 1939, and then, after the end of World War II, Moses, in 1945, and finally the rest of the family, in 1946, who passed clandestinely through the La Vajol area.

In 1939, following the last bombing raids on Figueres, Moisès and his sisters Rosa and Felicia, aged 11, 12 and 9 respectively, together with their mother and aunt, went into exile fleeing repression. pro-Franco with the immense corruas of refugees, and they arrived until Pont de Molins under the pressure of the pro-Franco Army, that bombed and machine-gunned the highway. Then they chose, advised by some residents of Llers, to return to Figueres.

These episodes of the retreat in the Alt Empordà region are evoked in six paintings created between 2014 and 2016 that represent the poetic and evocative side of the experience of horror lived by refugees and the flight of the civilian population from the crisis. humanitarian that represented republican exile. These paintings, such as “fugim” or “arrival at Pont de Molins”, are presented for the first time in the Empordà in Can Laporta de La Jonquera, among other samples of his pictorial work, more linked to floral themes, landscapes and material abstraction.

The reason for his exhibition in La Jonquera is due to the 80th anniversary of the republican exile. An episode that his family lived directly and that conditioned their future. Moses, who from a very young age showed great talents in drawing, studied at the School of Fine Arts in Perpignan and became a cabinetmaker, wood craftsman, sculptor and painter, a job he has recovered after his retirement. Moisès, now 91, lives in Santa Maria La Mar, near Canet de Rosselló.