Exhibition Authorized to leave. The exodus of 36 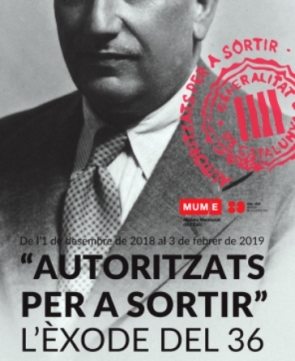 When in February 1939, about 450,000 people crossed the border to take refuge in France, in the Principality, thousands of Catalans began to arrive who had fled in the summer of 1936. It was a much more homogeneous group than the exile of 1939, as it was represented by Catalans linked to the ruling classes, the Church and the political right of the Principality.

The flight from Catalonia took place thanks to the work of foreign consulates in Barcelona, ​​but especially to that of the councilors and the president of the Generalitat himself, Lluís Companys. They were fleeing the revolutionary process and the consequent repression following the coup failure of July 19 in the Principality. Most embarked in the port of Barcelona bound for the south of France, but especially in Italy, in the city of Genoa.

The "Catalans of Genoa" remained abroad waiting for the war to end. However, when it ended, many of them had already collaborated financially, personally and professionally in the Franco cause. They returned to Catalonia behind Franco's troops to recover their properties and contribute to the configuration of the "Nuevo Estado".

You can download and consult the press release for the exhibition.