The archive of dust. The transit of memory 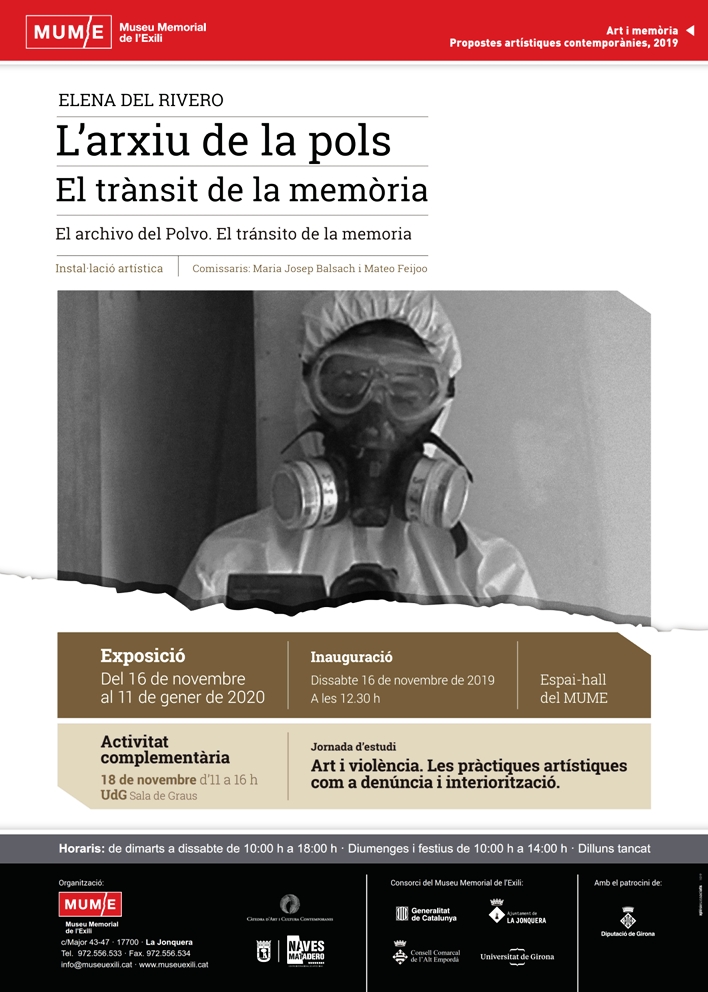 The archive of dust. The transit of memory

On 11 September 2001, the Valencia-born artist Elena del Rivero was in Madrid preparing her new exhibition ([Swi:t] Home) when she saw the collapse of the Twin Towers on TV. While looking at the dense clouds of dust she imagined her studio (located right in front of the south tower, at 125 Cedar Street) destroyed and her friends gone. She also collapsed. She immediately travelled home despite the impossibility of getting there due to the danger involved. Over time, the residents of Ground Zero were gradually able to return to their homes for limited periods. She found her studio completely covered in dirt and paper. She cleaned all the objects from the polluted dust produced by the fall of the towers and documented the work of clearing up the area and the daily routine with a video camera. She made over 100 hours of recordings and 3,000 pieces of papers that she numbered, sewed and inventoried. These materials are characteristic of the work of Elena del Rivero, who conceives the seam, the tear and the stitch as drawing and artistic expression conceptual materials.

The exhibition at MUME articulates a mise-en-scène that speaks of the effects of violence. A container with polluted dust pays authentic witness to a trail of death and destruction. The damaged letters on display embody an abstract emotion of suffering, imprints that reveal the lives lost during the 11S attacks. Moreover, the pictures of her studio and parts of the polluted area, which the artist calls tableaux vivants, show the pain of loss, grief and memory, not only in this experiential and geographic space of the artist but also in the contemporary field of the conflict: the displaced, the refugee camps, the transformation of architecture by trauma and the ravages of war.

Elena del Rivero (Valencia, 1949) between 1971 and 1974 studied Philosophy at the University of Valencia. In 1975 he moved to Madrid, where he studied painting and drawing at the Arjona Studio, and recorded at the workshop of Óscar Manesi. He started exhibiting in 1977 and made his first individual exhibition in 1980. In 1991 he moved to New York, where he earned a scholarship from the Pollock-Krasner Foundation. The most important exhibition of its series Cartas that took place in 1993 at the Elba Benítez gallery in Madrid. Two years later he participated in the First Johannesburg Biennial. In 2001 he received a scholarship from the Creative Capital Foundation and the New York Foundation for the Arts. In 2005 he participated in a residence at the Rockefeller Foundation in Bellagio Center, Italy. In 2015 he was awarded the Joan Mitchell Foundation prize and participated in a residence at the Joan Mitchell Foundation Center in 2017.

This exhibition has been possible thanks to the collaboration between Naves Matadero and the MUME through Elena del Rivero and with the involvement, as curators, Mateo Feijoo, artistic director of Naves Matadero, and Maria Josep Balsach, professor of The history of contemporary art and director of the Chair of Contemporary Art and Culture of the University of Girona (UdG).