Exhibition Art and Exile. Artists of the Catalan exile of 1939

Exhibition Art and Exile. Artists of the Catalan exile of 1939. Fons Fàbrega and Fons Narro

Exhibition based on the Abelard Fàbregas collection of the Empordà Museum and the Josep Narro collection on the MUME.

Within the context of the recovery of the artistic heritage of the Republican exile, this exhibition highlights two collections belonging to the Museum of the Empordà and the MUME.

On the other hand, the Fund of Josep Narro collects the work of this illustrator made in the French concentration camps between 1939 and 1941. All these artists coincided in Mexico, where they were welcomed by the active asylum policies of the Mexican governments from 1937 to 1945, and lived there after the Spanish War.This joint exhibition between the MUME and the Museum of the Empordà will include a selected synthesis of the two collections, which will be distributed between Figueres and La Jonquera.

The exhibition of the Museum of the Empordà will take place between January 24 and April 5, 2020 and the MUME between February 8 and June 14.

This exceptional exhibition will have a catalog with texts by Enzo Traverso, Maria Lluïsa Faxedas and Enric Pujol and a series of activities parallel to the MUME and ME:

Lectures at the Museum of the Empordà
Friday, February 28, at 7 pm, "Music in the concentration camps and on the way to exile", lecture by Jaume Ayats, musicologist and director of the Music Museum of Barcelona.
Friday, March 13, at 7 pm, "Catalan Art in Exile, A History Still to Write?", Panel discussion by Lluïsa Faxedas, Teresa Camps and Eric Forcada.

-Conference Creation in exile. Elements of reflection and testimonies
Saturday, May 16, from 10 a.m. to 1:30 p.m.
Opening conference: "The Catalan cultural exile of 1939. A vision from Mexico", by José M. Murià, historian and member of the Academy of History of Mexico.
Roundtable A: 'Creating in Exile'.
Round table B: "Literature in exile".

Curated by Enric Pujol
Designed by Marcel Dalmau
Organization: Museum of the Empordà and MUME 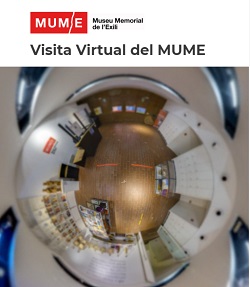